This post is coming to you later in the evening, as it was not easy for me to write. We have experienced our first fostering disappointment, and I debated sharing it with all of you. However, I made the decision to document our journey, and that means disclosing the highs as well as the lows.

We had our home visit Monday, and all went well. We had been discussing with the rescue the possibility of taking on a beautiful one year old female dog that was already placed in a foster home. This dog, whose name I will not disclose, had a really rough start to her life. She was found by animal control after her original owners left her out in the elements (rain, hot sun, etc) enclosed in a small wire crate, filled with feces. As in, that is where she spent all the hours of all her days. Poor baby. In spite of her neglectful past, this girl scored impressively on her evaluation while in the shelter, and was recorded to have tested well with other dogs. How amazing that her resilient spirit was not crushed by the mistreatment she received early on in life. What a testament to her, and also to the pit bull breed.

The LCPO rescue pulled our Foster Girl from the shelter, and placed her with a foster family that had 3 other dogs, 4 children, and a few cats. She reportedly got along very well with all of the above. However, at some point in her stay with the family, she started to experience issues with one dog in the home. Reportedly, this dog is a larger, male black lab. He is older, perhaps a bit cranky, and prefers to be left alone. The foster dog is a young, spirited pup who loves to wrestle and may not always remember to respect her elders. Unfortunately, the two dogs have at this point had two separate altercations, in which the male dog ended up having to visit the vet for stitches.

Hearing this information did not discourage me from considering this girl as a foster. As the rescue reported, it very well could be as simple as a personality conflict with the other dog. She does well with the other dogs in the home, dogs that she meets during play times, and dogs she was with in the shelter. This girl had a few medical issues that may have caused her to be less agreeable, and certainly the stress of being transferred to yet another location could not have been easy. The fact that this little girl had had an aggressive exchange with another dog did not originally deter me. I knew that this could have been for any number of unknown circumstances, and I did not want to write her off as a lost cause.

So, as is typical of me, I did some more research. I tried to talk with the current foster family to figure out what had triggered these issues between the dogs. The foster family told me that when Foster Girl got excited, she would jump on the other dogs and become spirited. Most of the dogs enjoyed this behavior, but the older male did not react the same. He would let out a warning growl, a dog’s polite way of communicating, “Hey, I’m not cool with this, so please knock it off.” If you speak dog, you know that for some pups, this is a precursor to a snap, which may be followed by a bite. In this scenario, according to the foster family, Foster Girl responded to this warning by choosing to engage in a dog fight. It was not pretty for any of them to watch. Additionally, now that the aggression has occurred twice between the dogs, they remain separated. Obviously, this is not an ideal situation for anyone in their family, 2-legged and 4-legged alike, so they are trying to find the little lady a new foster home.

When it comes to the dogs in our home, Tonka has always been a ladies’ man. He enjoys playing with female dogs. When it came to males, he had no problems for many years. Unfortunately, about two years ago, Tonka was attacked twice by an aggressive male labrador that lived on our property. Since that time, he has been cautious when meeting other male dogs, particularly if they are still intact.  Conversely, Gaige has never met a dog she didn’t like. However, she can be rough & overbearing, and does not always recognize warning signs from other animals.

In spite of all that, T + G = L.O.V.E. Tonka and Gaige never leave the other’s side. They eat in the same room, and never approach the other’s food bowl. They share bones, beds, toys, water bowls, etc. Their favorite past-times include wrestling each other, cuddling with each other, chasing each other, and playing tug-of-war together. I believe that this works, like any truly great relationship, because they communicate well with each other. Gaige is always up for play time with Tonka, which usually means that she chews on his legs like bones, hangs off of his ears and neck, and sometimes even climbs on top of him. However, if Tonka is not interested in rough housing, he simply disengages. If she does not get the hint (what woman does?) he will avert his eyes, and lower his head. If she continues to mouth at his ears and neck to inspire some play-fighting, he will let out a low growl. Never has this growling escalated to snapping, biting, or fighting, nor do I believe it ever will. This is not only because Gaige respects Tonka and leaves him alone when he exhibits these signs, but it is also because Tonka has known Gaige since she was a puppy, and truly loves her.

Are you noticing the issues that concerned me? Tonka, a large black male dog, exhibits certain signals to our lively pittie pup when she is wearing his patience thin. Unfortunately, these signs happen to correspond exactly with the Foster Pup’s triggers.

While it is certainly possible that similar ingredients may not add up to an identical recipe, it is worrying on a number of levels. Obviously, I must consider our two perma-dogs. Putting them into a situation that could potentially escalate to injury would not be fair to them. Furthermore, keeping them separated in case of disagreements would not be ideal either. Finally, you must remember that I am only one person. I am often here alone, and it would not be possible for me to control three dogs, should a dog fight break out. Additionally, this is our first foster dog. I want to make this a positive experience for all involved, which includes my husband Jonathan. While he loves our dogs like children, he is very new to the training and rescuing side of things, and I do not want to overwhelm him too soon. One day, I would love to take on a more challenging case. I’m just not sure that now is the right time…

What is even more concerning than all of that, is the effect it would have on Foster Pup. To me, we would be placing her into a home that had some very similar environmental factors to the home where she was currently having issues. If for whatever reason, she does not appreciate growling from a black male dog, we would be setting the poor girl up for failure. She would be transferring homes yet again, which will continue to wear on any animal. Furthermore, the rescue’s policy is that if a dog has the same issues of aggression in more than one foster home, they must be placed in a boarding facility. While these are more ideal than most shelters, she would not receive the same amount of attention as she would if kept in a foster home. This would also come at a more extreme cost to our rescue.

After discussing our options with Casey, our contact from the LCPO rescue, as well as sleeping on it for a night, we made the decision not to bring Foster Girl into our home. This was a really tough decision for me, especially. As a people-pleaser by nature, I hated disappointing the rescue. I want them to recognize just how committed we are to being capable foster parents. More difficult than that, was the feeling that I had given up on Foster Girl without ever meeting her and giving her a chance to be successful. I feel like a foster failure, before I’ve even brought a dog into our home! 😦

What I had to remind myself, was that the decision we made was in large part with Foster Girl’s best interests in mind. My hope is that she will be able to find a home with perhaps one other submissive dog. She is truly a sweetheart. Her distaste for one type of dog should not make her unadoptable!  I do not believe that she is a dog-aggressive dog, I just feel that our environment would not be best for her future.

Aside from the obvious, this also means that we are back on the market for a special foster pup! We are in contact with our rescue, looking to pull from a shelter in Ohio. We will keep you posted on our search! Until then, I will leave you with some pics of our pups, courtesy of our new camera.

Gaige, waiting (patiently?) to go outside 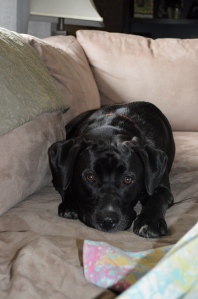 The progression of “No dogs on the couch”…
1… 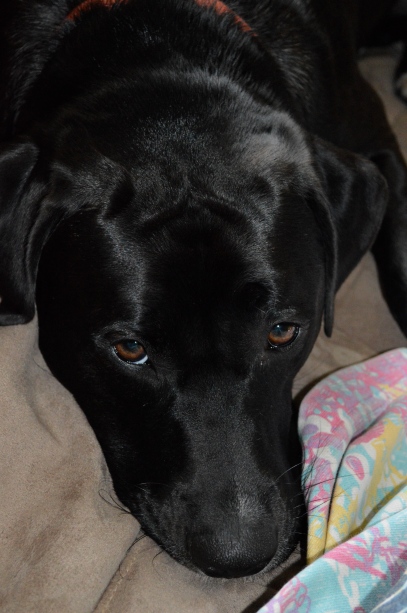 How much is that doggy in the window? 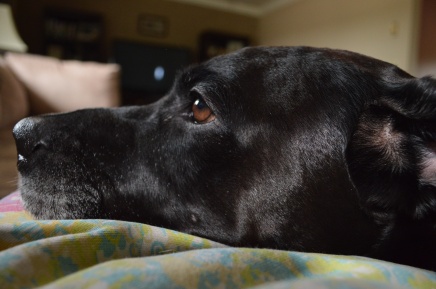 Tonka didn’t want to be left out of the photo shoot!

4 thoughts on “Barking up the Wrong Tree”

The best part about blogging? Feedback from people like you! Cancel reply